Monogyny refers simply to the possession by a colony of a single egg-laying queen, or reproductive female, og ”gyne”, as she is often called in the myrmecological literature. Pologyny is the possession of multiple queens. […] The founding of a colony by a single is called haplometrosis, multiple-queen founding is referred to as pleometrosis.


”... queens of all kinds of social insects should prefer to retain personal reproductive rights and surrender none to their sisters or daughters ...”
”Since extra queens would be an unnecessary energetic burden on the colony's growth, it should be an advantage to the workers to eliminate them.” 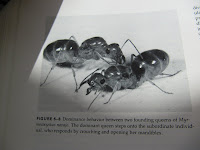 Jeg er nået til kapitlet: Who is in charge, queens or workers?

The picture that has emerged in contemporary studies is of a moderate amount of struggle within ant colonies. Queens and workers appear to be in general conflict over the management of the ratio of investment in new queens and males. In some species, under appropriate conditions, queens battle queens for principal reproductive rights.

A remarkable general phenomenon of ant biology that might be interpreted as dominance by the queen over the workers is the queen-tending pheromone. Queens are generally attractive to workers, who often form entourages around them, licking their bodies, feeding them with trophic eggs and regurgitated liqiuds, and guarding them against intruders.

Yet another indication that queens can exert control comes from the extraordinary discovery by Masuko (1986) that queens of the primitive ant Amblyopone silvestrii are vampires: they depend exclusively on hemolymph (blood), which they obtain by biting the larvae. […] The bodies of the donors are scarred, but they appear otherwise unharmed.

In each case it could be argued that the workers are not really ”controlled”, in the sense that a conflict exists between them and the queens that is resolved in favor of the queens. Quite the contrary: the workers may in fact simply be monitoring the presence of the queens and responding in ways that increase their own inclusive fitness.